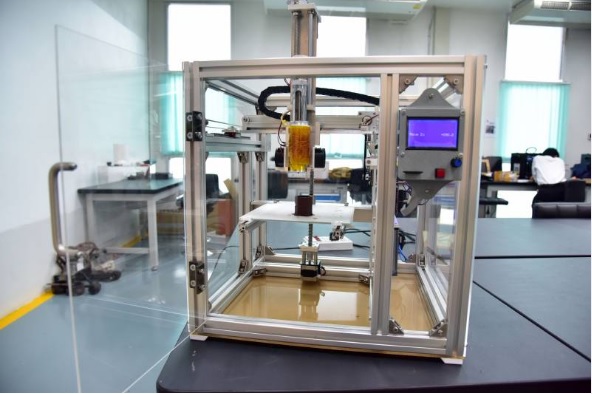 To portray their conceptual ideas, a group of 4th year students from the Department of Industrial Engineering, Faculty of Engineering Rajamangala University of Technology Thanyaburi (RMUTT) consisting of Mr. Sarawut Tamami, Mr. Natdanai Sukming, Miss Natthicha Pumpkin-On and Ms. Sukanya Mee-Sala had jointly collaborated to design and construct a 3D printer for chocolate mold printing by molding injection method or in other words molding in layers. This innovative reached had graciously been supported and advised by Dr. Kulachat Chulapen, Lecturer at the Department of Industrial Engineering, as project consultant.

Mr Sarawut discussed that the design and construction process of the 3D chocolate printer had been taking off by investigating chocolate forming process. In the past, the chocolate production had been implemented by traditional molding method and thus, to create molding block was considered to be necessary.  In order to reduce molding block costs by producing large volume of chocolate, these students had decided to design and build 3D chocolate printer to help create complex and unique shapes that would be cost-saving when compared to conventional way of production.

The 3D chocolate printer that has been designed and composed with main components including the nozzle, heater, chocolate tube packaging, X-axis and Y-axis moving unit of 3D printer structure, as well as table for 3D Chocolate printer that was designed according to Cartesian principles of linear motion in all 3 axes comprising X, Y and Z axis. Moreover, operating distance moving along the mobile axis had also been tested by measuring the distance from the reference point to the specified distance. Testing of chocolate types was also conducted along with injection efficiency that was done in a straight and a curve line in order to determine accurate chocolate printing temperature settings.  At the later stage of experimental testing, suitable temperature and velocity were determined to design and print a work piece with the width of 30mm, the length of 30 mm and the height 30 mm.

“To conduct chocolate printing, injection molding or layering technique ws applied, consistently moving chocolate through the heating head until chocolate entirely melt into liquid, and finally injected them into layers.  The 3D chocolate printer has a total working area of ​​150 millimeters in width, 150 millimeters in length and 100 millimeters in height. In addition, the printer’s maximum injection capacity was available at 50 milliliters with the movement speed of 10 millimeters per second and temperature at 34 degrees Celsius at a flow rate of 23.4 cubic millimeters per second. The size of the work piece is similar to the one that was designed resulting from suitable temperature that matches the chocolate flow. At the same time, movement speed is also fitting with the chocolate solidification time in which the freezing temperature is 30 degrees Celsius. Furthermore, the Compound type chocolate contains 51% of sugar, 35% of vegetable fat, 14% of cocoa powder, and 14% cocoa mass, which are most suitable for this 3D chocolate printer model, “Mr. Sarawut explained.

Concerning the teamwork and process, the group representative concluded that at first, melting of chocolate into a bar of the appropriate size for the tube was conducted. Later on, chocolate bars were then put into the tube. The tube was then assembled to the injector set before adjusting the appropriate temperature that would be ready for injection molding. And at the final stage of the procedure before printing chocolate, the program was set to operate the machine according to the desired shape.

Dr. Kulachart said the benefits of creating the 3D chocolate printer as a research project was that the prototypic work piece could further help develop commercial awareness for the food industry including those were from bakery circles who could make use of the machine by designing detailed and specific work pieces as needed. In addition, the research innovation would help add value to the bakery products and reduce work time and labor. The prototype of this 3D chocolate printer costs a total of 30,000 baht, but if further developed and commercialized, it was assumed that the production cost could be much lower and yet assist reduce the import of 3D printers from overseas.

“In the future, if the machine is developed commercially, I really believe that this 3D printers will be cheaper and yet, small, and easily portable with high printing precision that could create various shapes and sizes in no time. And I could assure you that this machine will also be available in household and food business industry, “Dr. Kulachart concluded

Most recently, the creative work project of engineering and technology had made Mr. Sarawut receive a scholarship from “Quality youth scholarship of the year 2019” along with a certificate of quality youth of the year in 2019 from the Science and Technology Council of Thailand Foundation. For those interested, additional information or details can be inquired directly at tel. 086 628 9294. 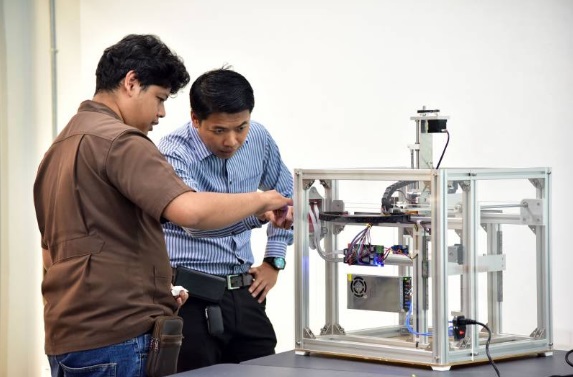 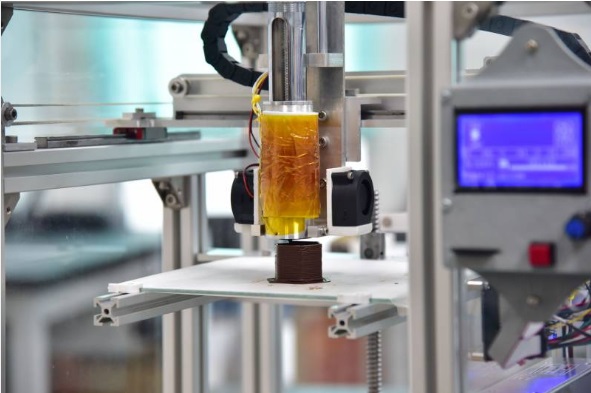 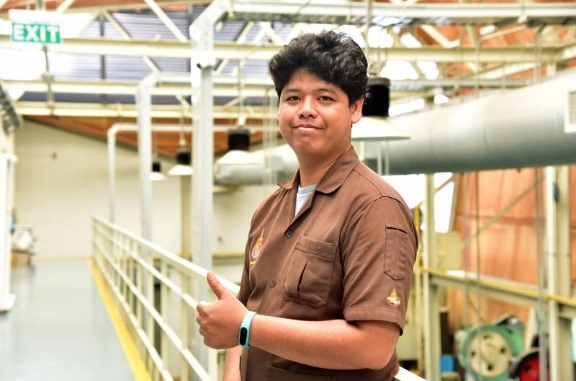