Using fungi leavening to lead the growth of mangrove 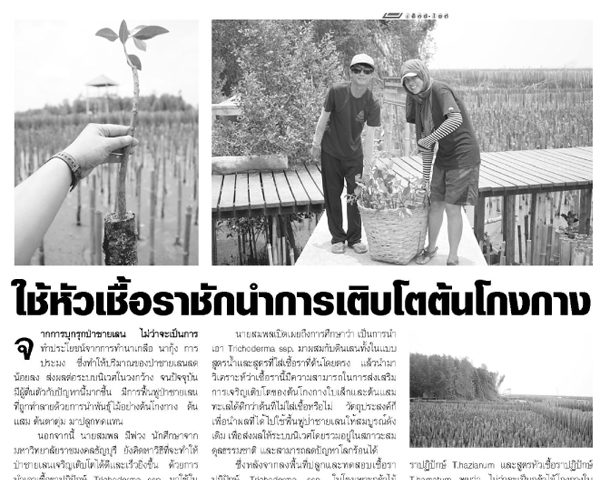 Mr. Sompol revealed about the study that it is the implementation of Trichoderma ssp. To mix with soft soil in the forms of liquid formula and fungus-direct-to-tree formula, then analyze if this fungus has capability in the growth support of mangrove trees better than those that have not been used. The objective is to take the result to restore the mangrove forests to equalize the ecosystem and be able to reduce global warming.

After inspecting the growing area and examining the fungus antagonist Trichoderma ssp.” in young-mangrove plant-cultivating house with 3 leavening antagonists which are T.viride, T.hazianum, T.hamatum found that either young small or big-leaf mangroves or can grow well with T.viride. The height ratio of small-leaf mangroves equal to 54.60 CM, big ones equal to 79.65 CM, and Aegiceras cornicalatum equal to 55.57 CM.

He said that the formula that he used 2 formulas in the experiment which are fungus antagonist from millet seeds. The easy instructions of it are as follows: 1. put 12 hour long-soaked millet seeds in boiling water then boil till their covers break and drain water out, wait for a while, then contain them into Duran bottles. 2. Steam millet seeds at 121 degree Celsius for 15 minutes and leave till they are cold. 3. Random fungus antagonists fed on PDA food aged 7 days for 3 kinds such as T.hazianum, T.viride and T.hamatum, then put them on the seed surfaces and ripen at room temperature in dark for 7 days for use fungus antagonists from saw dust later on.

For the instructions of fungus antagonist formula from saw dust are as follows: