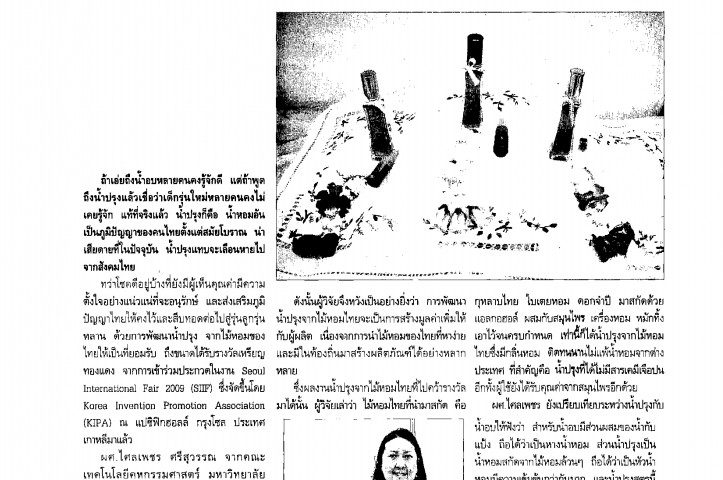 If we talk about “Namob” (one of many kinds of Thai perfumes), perhaps, many people have known this name well but if we talk about “Nam Prung”, it is believed that many Thai youths in new generation will not know what it is. In fact, it is Thai traditional perfume which has been created since the Thai antiquity. However, it is regretted that, now, “Nam Prung” is slightly disappeared.

Fortunately, there still is someone envisaging its significant value by developing “Nam Prung” from Thai fragrant wood until it is accepted and awarded as bronze medals prize under the name of Alchemy Development of Thai Classical Perfume. This prize is awarded from Seoul International Fair 2009, conducted by Korea Invention Promotion Association (KIPA) at Pacific Hall, Seoul, Korea.

Asst. Prof. Saipetch Srisuwan, an instructor and researcher from Faculty of Home Economics Technology, Rajamangala University of Technology Thanyaburi, RMUTT, who developed this “Nam Prung”, portrayed that “Nam Prung” has long historical background. It was created by Thai women in the palace since the period of World War II. It was produced by combination of Thai fragrant wood. Unfortunately, at that time, there was limitation of fragrant wood as well as there was also much importation of foreign perfumes which it led to continually shorten the usage of Thai one.

However, the researcher fully hopes that this research will really help create more value for “Nam Prung” which it is produced by the combination of Thai fragrant woods. Furthermore, these woods are easily found in local area and they can also create more various products. Its combination of the perfume is Thai rose, fragrant pandan and michelia longifolia Bl. These woods are extracted by Alcohol and mixed with herbs and fragrance. After that, leave it according to the appropriate period, then, it will become “Nam Prung” which is as fragrant as foreign perfume. Moreover, it is free from chemical substance therefore, the user can absolutely benefit the Thai herb as well.

In addition, she also explained the difference of “Nam Prung” and “Namob”. These are different at their mixtures. “Namob” is produced by powder and water, thus, it can be accounted as diluted perfume. In contrast, “Nam Prung” is produced by absolute Thai fragrant wood; therefore, it can be accounted as concentrated perfume. Badly, the direction of “Nam Prung” was kept as secret formula which it is only transited by generation to generation in particular family.

Never end the hope, for who is interested in purchasing “Nam Prung”, it is available by contacting directly Asst. Prof. Saipetch Srisuwan, Tel: 08-6786-2104