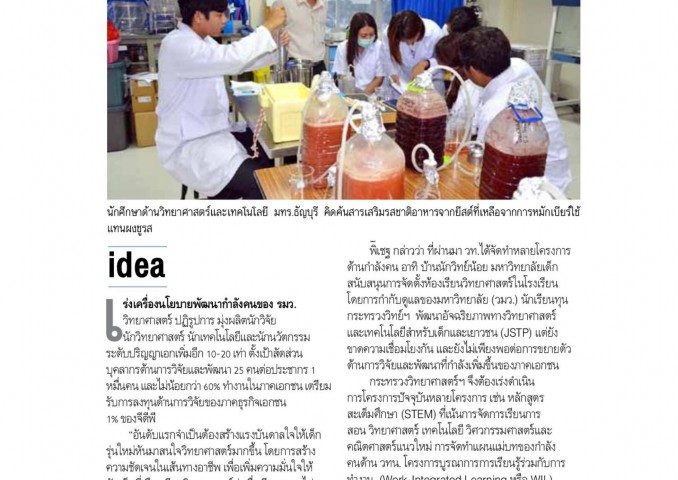 One of the main policies embraced by the Ministry of Science and Technology, in order to address the lack of scientists in the country, is to accelerate the production of scientists, researchers, technocrats, and innovators. It aims to produce 10-20 times more scientists at the doctorate level, as well as achieving the 25 researchers per 10,000 citizens ratio, with at least 60 percent of whom are employed in the private sector, and allocate 1 percent of the GDP to research in the private sector.

“A top priority is to motivate the new generation to study science, by providing a clear picture of the science career path after graduation,” said Minister of Science and Technology, Dr. Pichet Durongkaveroj. “This would require collaborations from the private sector,” he added.

So far, the Ministry has initiated many programs, such as young scientists’ home and children’s university, in addition to supporting the establishments of science classrooms in schools, unveiling the Junior Science Talent Project (JSTP), and offering government-funded scholarships. There remains, however, the lack of integration among these initiatives and more is still needed to be done to support the expansion of research from the private sector.

According to Dr. Pichet, the Ministry plans to put in place many other programs, such as STEM Education (Science Technology Engineering and Mathematics Education), science and technology human resource master plan, work-integrated learning (WIL), and talent mobility, which enables lecturers and researchers from state agencies to gain work experiences and skills in private organizations.

The government provides incentives in order to attract the private sector to invest in joint research projects, including raising the tax exemption ceiling for expenses allocated to research and development to 300 percent, from 200 percent and for individuals, raising the tax exemption ceiling for donations allocated to research and development funds, and amending the regulations on procurement to encourage purchases of local innovations and services.

“For this reason, we particularly support the academic programs that produce graduates in the fields that will meet the demands of our policies, such as big-scale data management system, agricultural zoning, agro processing industry, and design engineering and automation,” said the Minister.

In addition, human resources are also required in other support areas, including bioengineering, bioinformatics, biopharmacy, biostatistics, agricultural information system, and aerospace technology. The scholarship scheme has been clearly laid out well into the future, in order to support overseas education and repatriation after graduation, with a long-term vision of upgrading Thailand’s economic status. 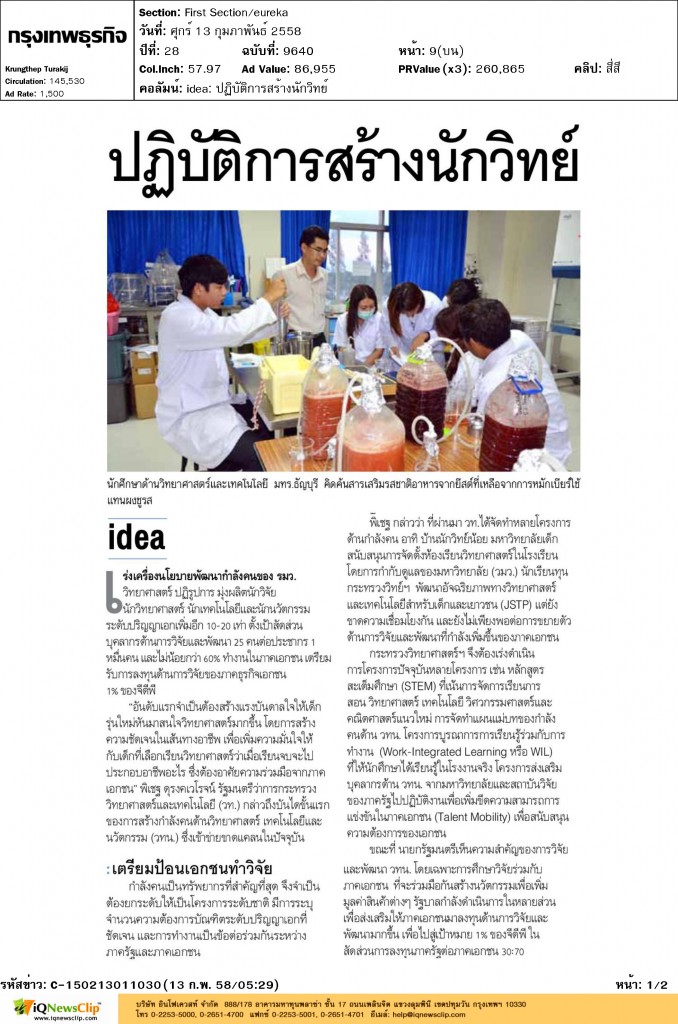