Mr Pinit said that Pathum Thani province has an area of ​​more than 3,000 rai of bananas generating lots of income for the local farmers. However, after harvesting the banana fruits from the trees, the plants would be chopped down in order to prepare for planting area. With more than 30,000 trees produced per year and only as fertilizer for soil, leftovers of banana tress such as spathe and leaf stalk of bananas would be separated into banana fibers that could be made use of, thus the banana fiber production project was required by the Ministry of Interior to be created in each province. This project has based its project values on the Royal initiative and the Philosophy of Sufficiency Economy for a long term self-sustainable living in the community.

Regarding to Pathum Thani Province interest, the idea of developing natural fiber was pursued, particularly when banana plant could commonly be found in Pathum Thani region and thus even was considered them to be an economic crop. Since the university had already developed fibers from banana plants and Pathum Thani was one of the best places to grow and produce bananas, both had decided to collaborate and develop banana fibers into loincloth and dressings making them provincial clothing of Pathum Thani.

With the interest of local intellects and production of fabric handicraft, a group of housewives in Krasaeng sub-district who came together to create fabrics made from banana fibers under the name of the project called, “Developmental project of  area management systems by applying innovations to improve waste management efficiency and to increase product values in Pathum Thani Province”.

Mr. Phongthep Roongruang, a Provincial Developer of Pathum Thani province revealed that Department of Textile and Apparel Faculty of Home Economics Technology, RMUTT had brought their team of professionals to help educate the locals both theoretically and practically. In order to help them produce quality fabrics, 4 fabric workshops were set up including “Banana fiber separation” in course 1, “spinning of banana fiber” in course 2, “weaving banana fiber” in course 3 and finally in course 4, demonstration of manufacturing processes including sewing and dyeing were illustrated to produce the provincial clothing of Pathum Thani province.

It could be suggested that banana fibers had outstanding properties in terms of their strength and glossy looks and yet it could also be weaved into yarn and produced as apparel and household products.  Moreover, not only production of fabrics made from banana fiber could help reduce waste materials from clothing production process, add product value to clothing products manufactured by the locals but also reduce the export of natural fibers from overseas. Not to mention how it could also be produced as Eco-friendly clothing products such as clothes, carry bags, hats, shoes, etc. and to say the least, it would certainly benefit the textile and clothing industries. Last but not least, it could be concluded the research project were capable of educating the locals, raising their income, and becoming the identity of the province itself.

Thereby, after looking up for in-depth information on banana fiber research, a development of banana fiber which had already been conducted by RMUUT professional personnel,   a request of assistance from Asst. Prof. Dr. Sakhon Chonlakorn, a Faculty Director of Home Economics, Department of Textile and Innovation had been carried and thus, she was invited as the main speaker of the project to help pass on her knowledge.  Moreover, the project itself had been received its cooperation from the provincial government heads, district administrators, local administrators, community leaders and Phra Maha Phaibun Thitathammo, Abbot of the Kai Thea temple who allowed the project committees to use the Kai Promotion Temple Professional Center Building as a place for educating the trained locals who could further apply their knowledge to raise their income.

This project was as part of creating locals’ job opportunities, increasing the income, and reducing unnecessary expenses that would follow the Royal initiative guidelines, “Philosophy of Sufficiency Economy”. Moreover, this support was established to form agricultural groups that could turn waste materials in the area into renewable energy or even processed them into standardized community products such as OTOP .Last but least, the locals could eventually make use of their available banana resources and developed them into provincial clothing of Pathum Thani province. 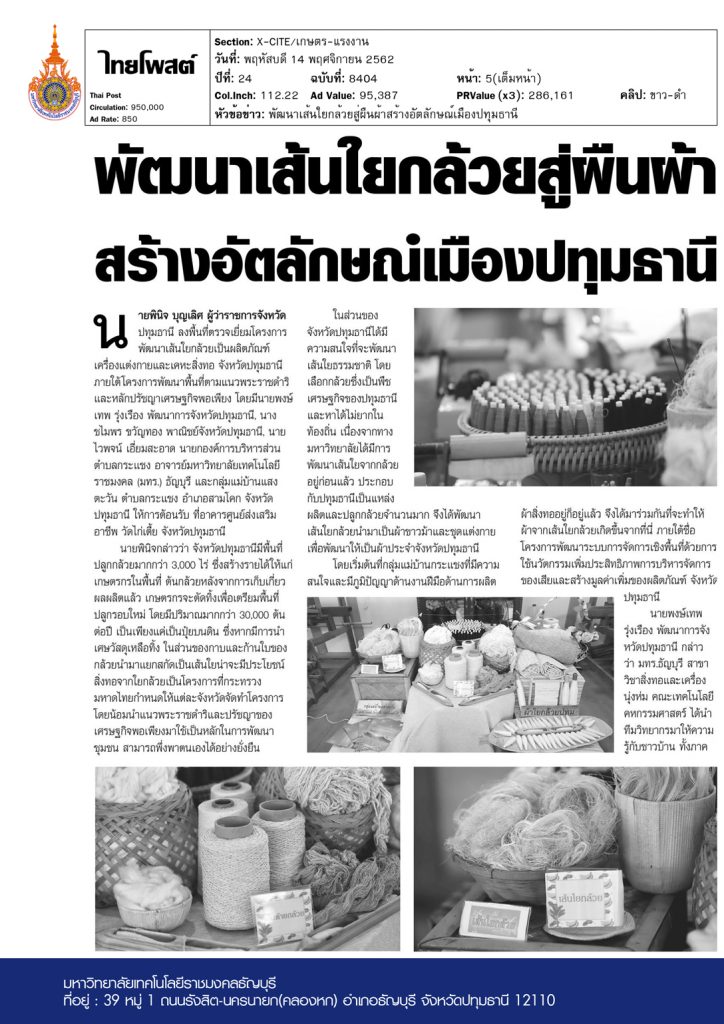 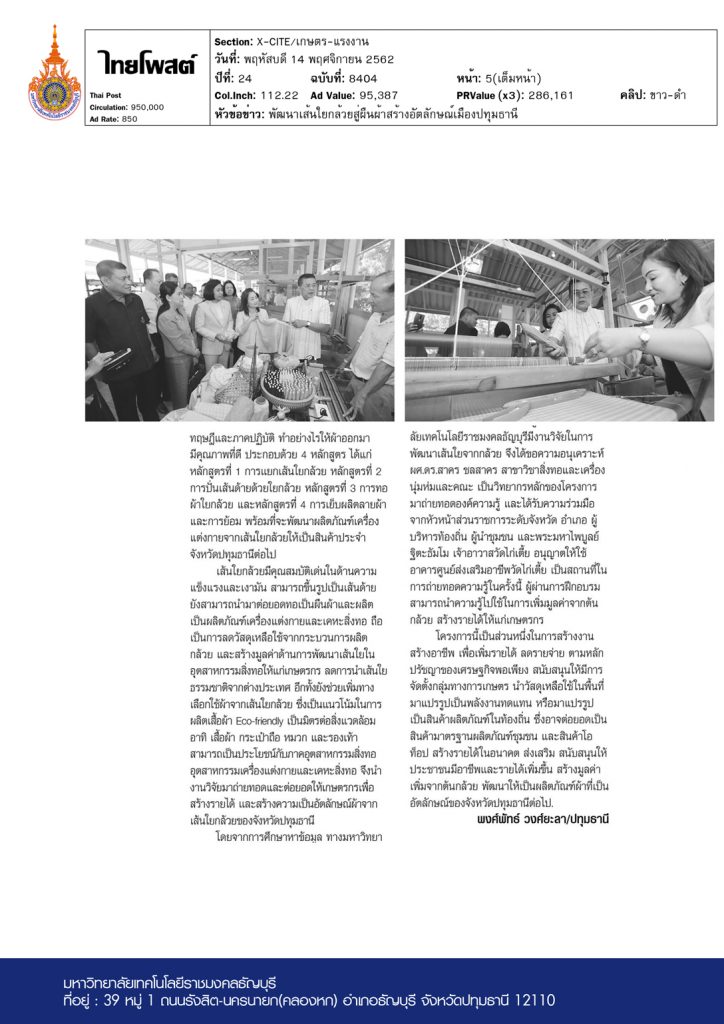