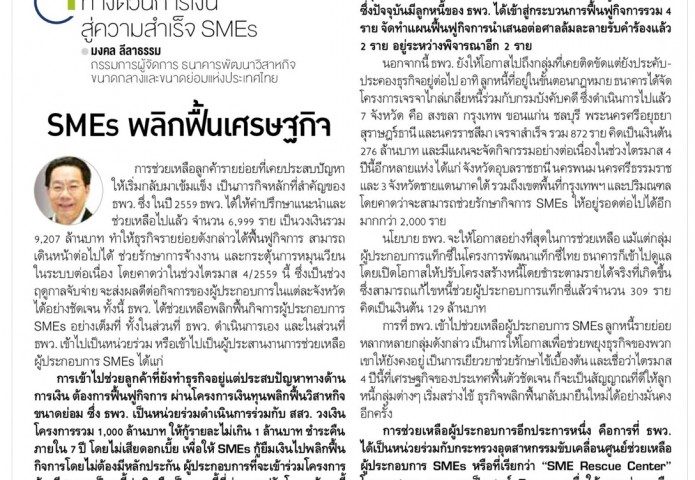 Mr. Mongkol Leelatham, President of the state-owned Small and Medium Enterprise Development Bank of Thailand (SME Bank) has helped small businesses that have faced difficulties recover and become more competitive. In 2016, SME Bank has consulted and advised 6,999 businesses, totaling THB 9,207 Million. SME Bank has assisted in employment and stimulating system circulation. It is expected that the fourth quarter of 2016, known as the spending season, will have a clear positive impact towards SME businesses in every province. Additionally, SME Bank has helped with SME recovery both in terms of the bank’s own processes and collaborations and coordination by:

Helping SMEs that experience financial difficulties through the Rehabilitation program to revive SMEs, a collaboration between SME Bank and the Office of Small and Medium Enterprises Promotion (OSMEP), which has provided a total of THB 1,000 Million in loans, with no more than THB 1 Million to be repaid within seven years without interest, to let SMEs improve business growth without collateral. SMEs that would like to join the program should have a debt default or be a debtor that has undergone debt restructuring. Under the new act, SMEs will be able to join the program once the approval process is complete. SME Bank, in collaboration with RMUTT, will conduct in-depth analyses of each SME, revisit the SME’s current business plans and develop solutions to empower them. Currently, there are a total of four SME cases in the program. Two cases have been presented to the bankruptcy court, while two cases are awaiting approval.

Moreover, SME Bank also provides opportunities for debtors in the legal stage by establishing a debt settlement program with the Ministry of Justice, which has been implemented in seven provinces – Songkla, Bangkok, Khon Kaen, Chonburi, Ayutthaya, Surat Thani, and Nahkon Rachasima. A total of 872 cases has been successfully negotiated, totaling THB 276 Million. SME Bank also has plans to continually organize activities in the fourth quarter, rolling out in Ubon Rachathani, Sakhonpanom, Nakhon Srithamarat, the three southern border provinces, and the greater Bangkok metropolitan area. It is projected that these activities will sustain more than 2,000 SMEs.

Per SME Bank policies, the bank will also provide opportunities for taxi operators in the Thai Taxi Project by allowing debt restructuring regarding payments in terms of actual amount spent, which has solved debt problems for 309 taxi operator cases, totaling THB 129 Million.
Besides the above ways that SME Bank has helped SMEs, it has also collaborated with the Ministry of Industry to establish an SME Rescue Center at all SME Bank’s branches. The SME Rescue Center will provide help to SMEs in terms of solving financial issues and other problems, such as management, cost reduction mechanisms, marketing, channel distribution, and product development, to develop SMEs to be the nation’s growth engine, in line with the government’s economic agenda.