The hydraulic set moves the patient from the car

Assoc. Prof. Dr. Prasert Pinprathomtharat, Rector of Rajamangala University of Technology (RMUTT), Pathum Thani, revealed that faculty professor has created a ‘pyrolysis prototype machine’ to successfully replace plastic waste and used engine oil as fuel.  The fuel has a quality equivalent to diesel oil without the need for distillation with qualification passed the standards as specified by the Department of Energy Ministry of Energy.  This research is a success that extends its implication from the laboratory level to the prototype of factory level, which is another alternative to reduce the amount of waste and also get quality fuel that is equivalent to diesel without the need for additional distillation.  In addition, this work is now in the process of applying for intellectual property protection.

Asst. Prof. Nattacha Phetyim, Lecturer of Department of Chemical and Materials Engineering, Faculty of Engineering, Thanyaburi University, the owner of the work, revealed that at present, Thailand has about 2 million tons of plastic waste produced per year and is likely to increase continuously. However, on the average about 0.5 million tons of plastic waste has been made use of per year.  While the remaining 1.5 million tons are still difficult to dispose due to the slowness of decay when using landfill method, and combustion will affect the environment in the case of Incineration. While used engine oils from motor vehicles are also a problem, as seen from the increasing number of motor vehicles every year, only 20 – 30 percent that has been disposed correctly.  Therefore, the research and development the prototype of Pyrolysis process between used motor oil and mixed plastic waste has been conducted to produce fuel equivalent to diesel.

Asst. Prof. Natthacha says that this research is supported by research funding from the National Research Council of Thailand (NRCT) by the Biodiversity-based Economic Development Office (Public Organization) and Wisdom Inverter Company Limited, Generally, the plastic waste is normally process into low-quality pyrolysis oil, which does not passed the standard and additional refining process is required to get the diesel oil.   This are the results from combining many types of plastic waste through the process of heating under an oxygen-free atmosphere.  From the study, it is found that the proportion of different plastic types used to combine with motor oil will affect the quality of oil products from the pyrolysis process.  In addition, the use of used motor oil as a raw material results in increased heat transfer and reduced viscosity of the substance inside the machine, resulting in faster melting and reduced energy used in mixing.

The owner of the work says that the highlight of this work is the design of the reactor to be able to intake used motor oil with plastic waste.  Both plastic bottle caps (HDPE) and hard plastic straps (PP) , mixed in proportion of 50:30:20 percent by weight, are used to produce quality fuel equivalent to diesel without the need for distillation, which help improve the fuel quality.  And when the oil is tested according to ASTM standards, it is found that there are 67 cetane index, specific gravity of 0.82, flash point at 58 degrees Celsius, distillation at 90 percent, and temperature 350 degrees Celsius, which passed the diesel standard as the Department of Energy Business Ministry of Energy has specified. 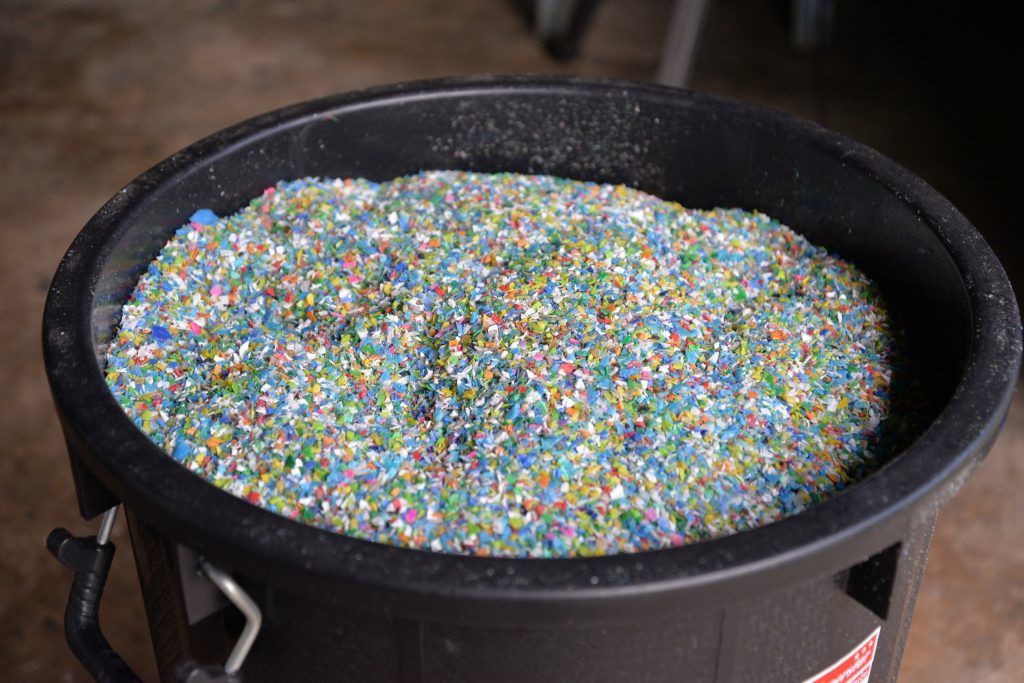 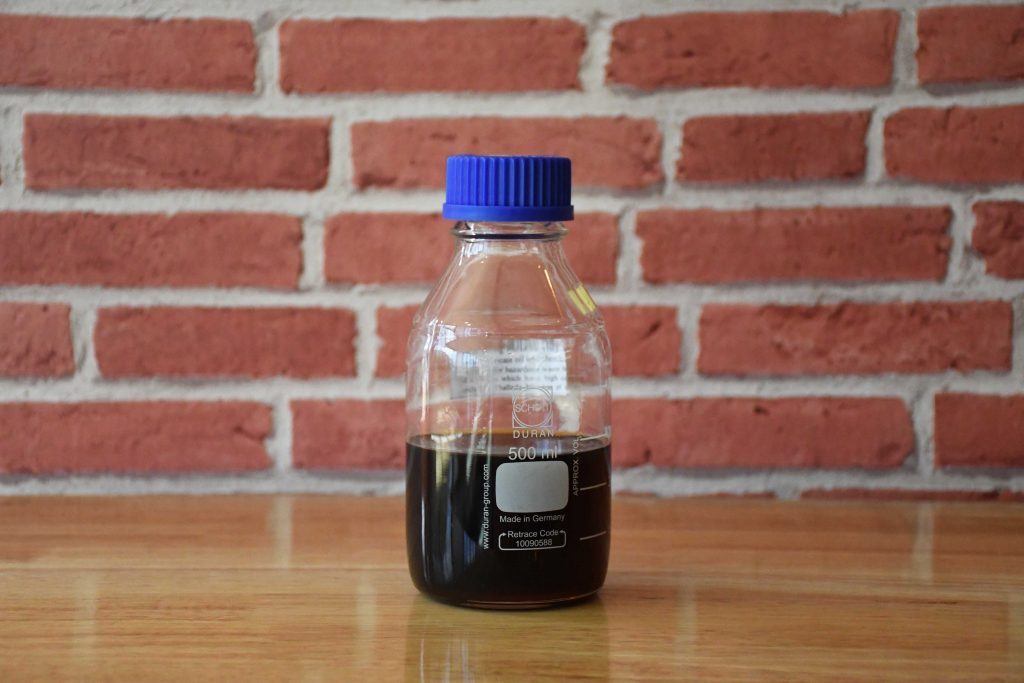 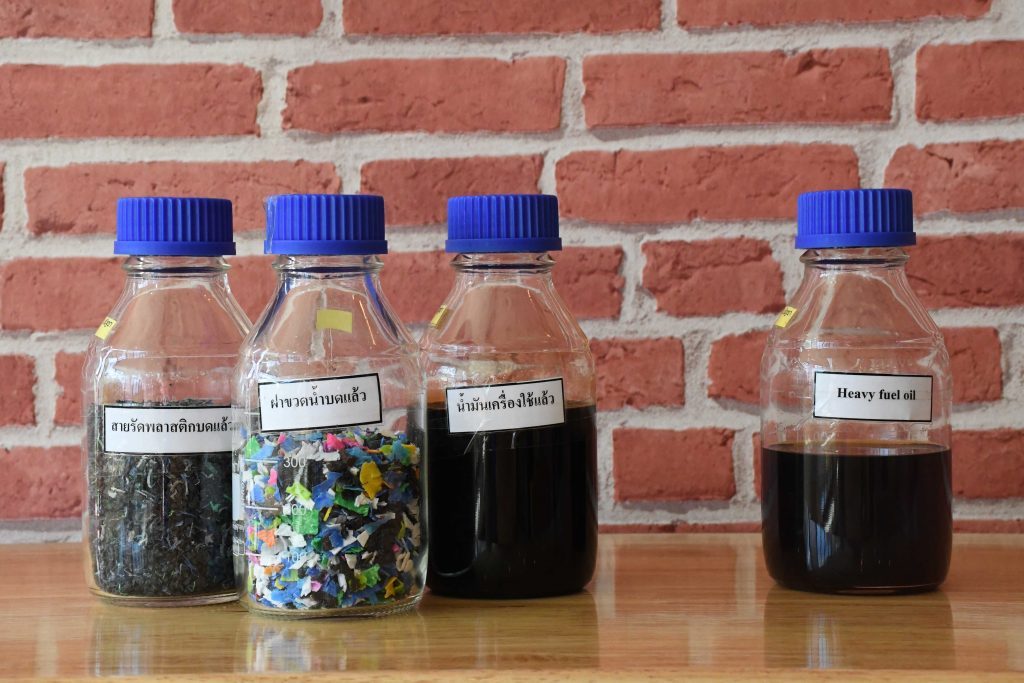 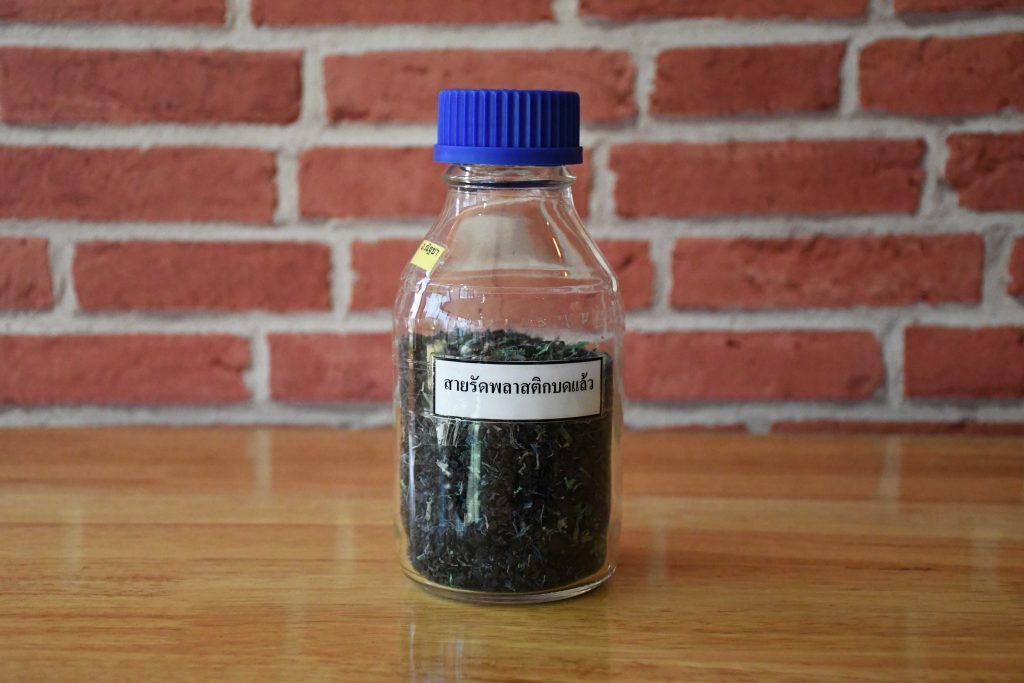 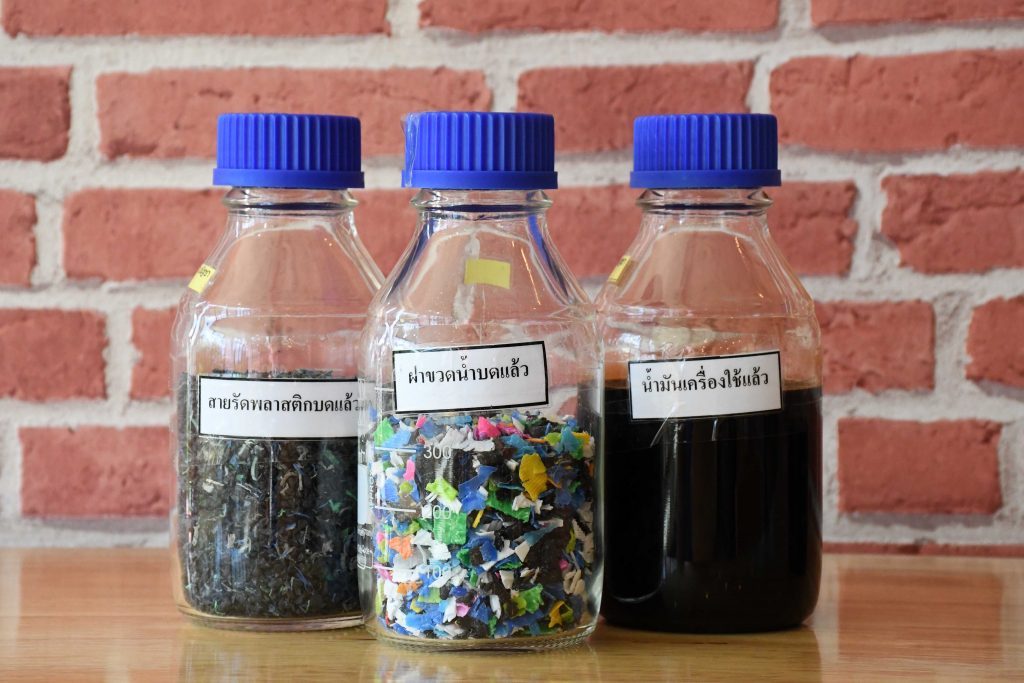 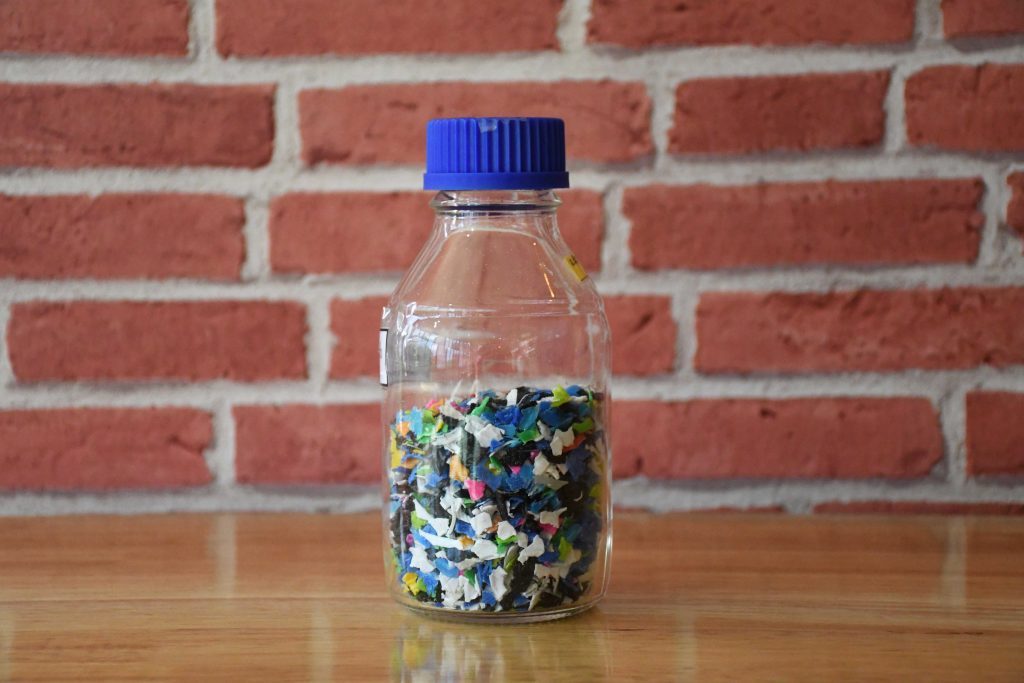 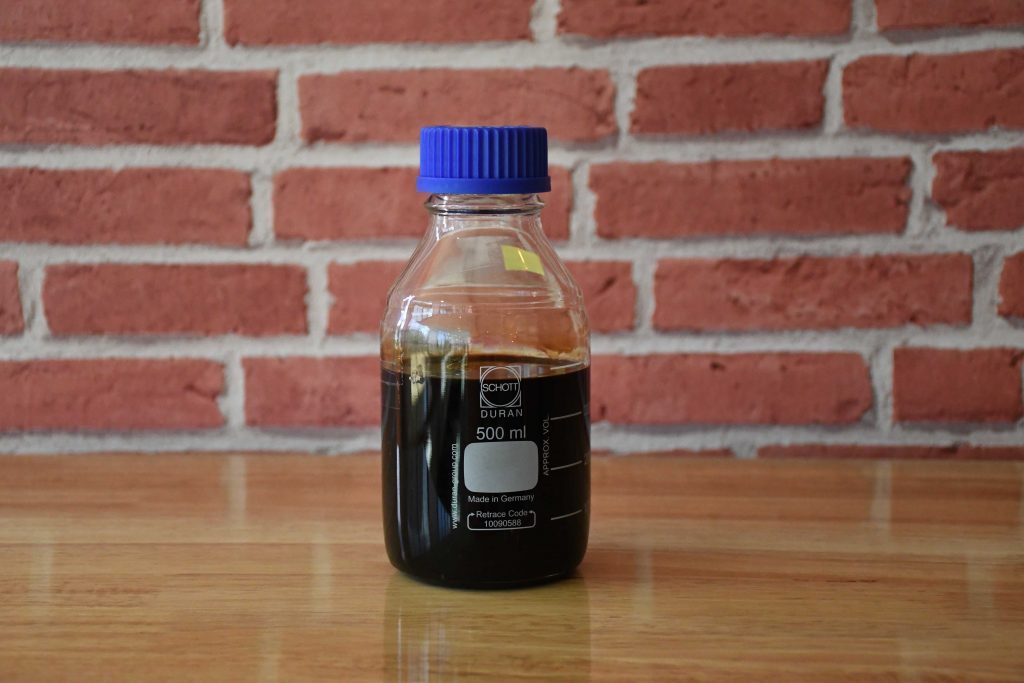 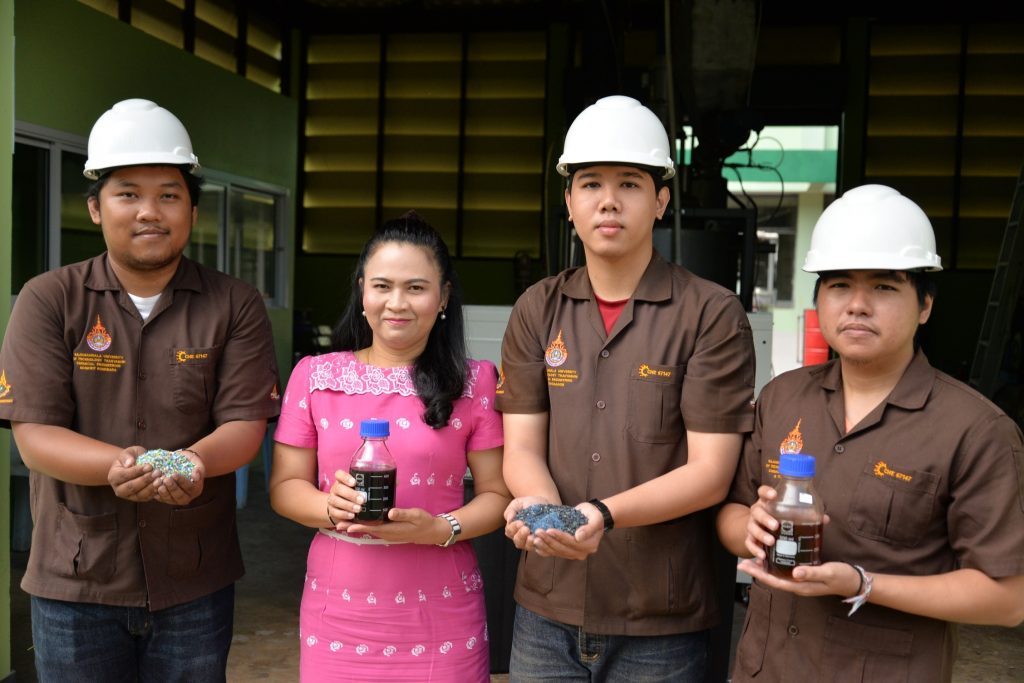 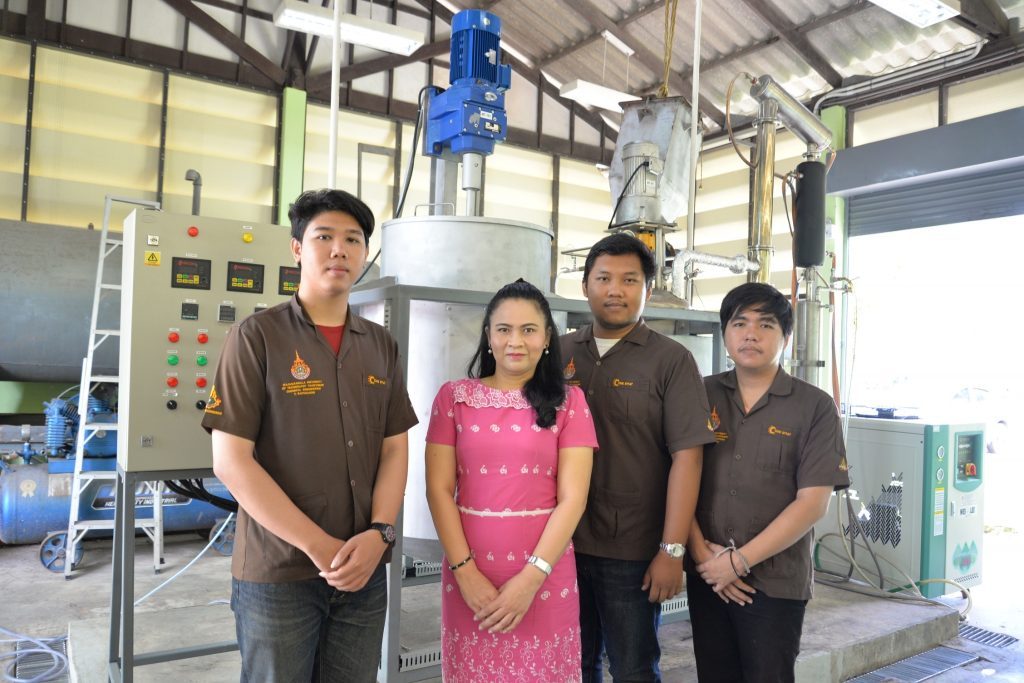 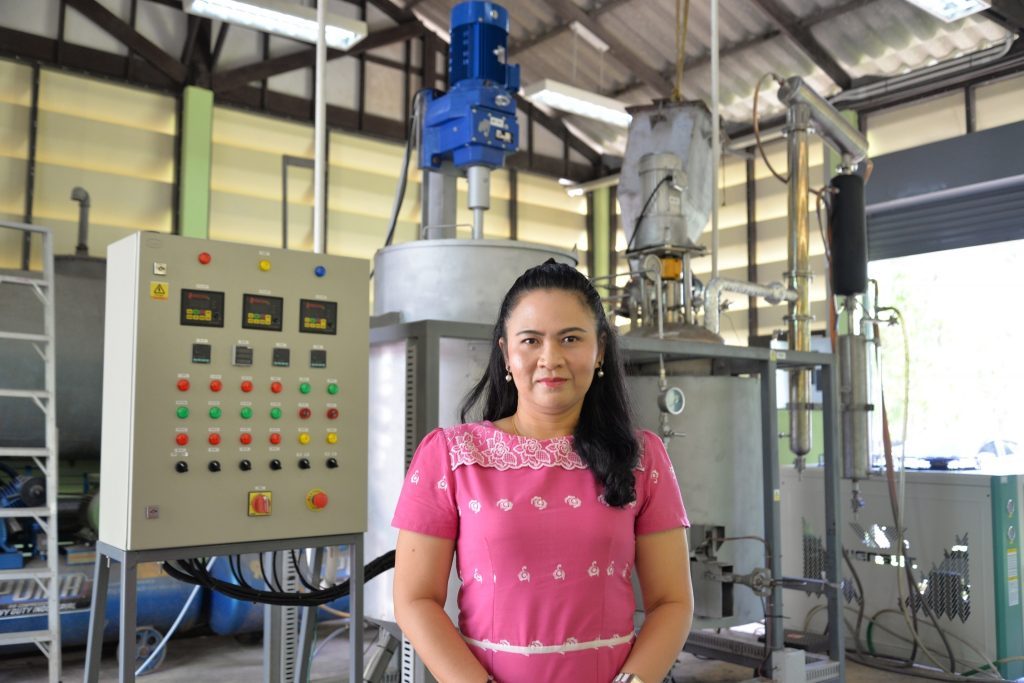 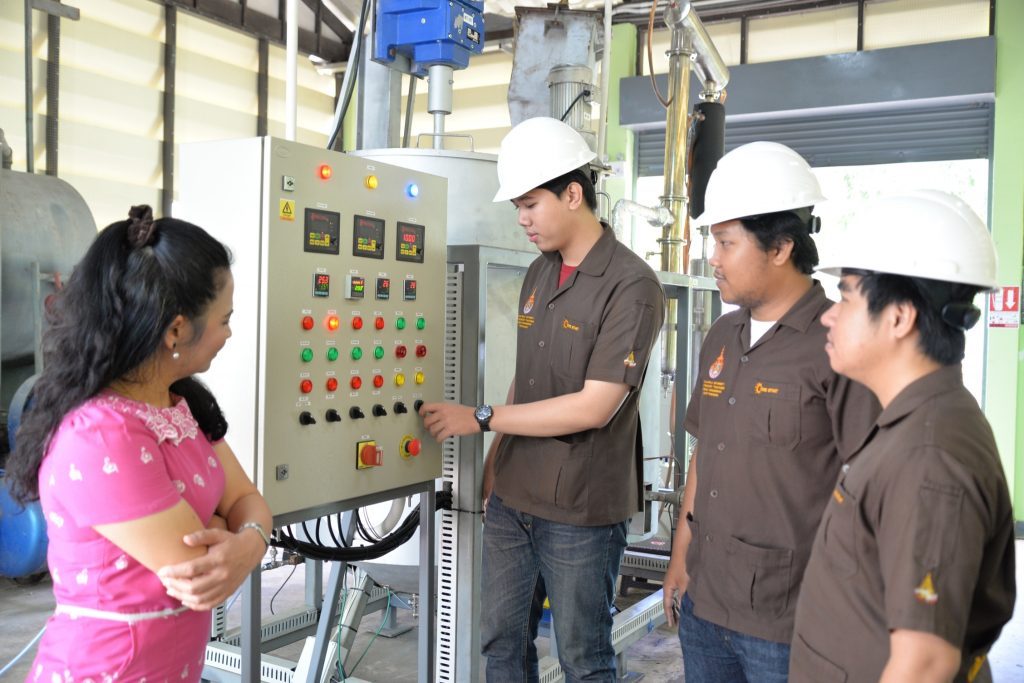 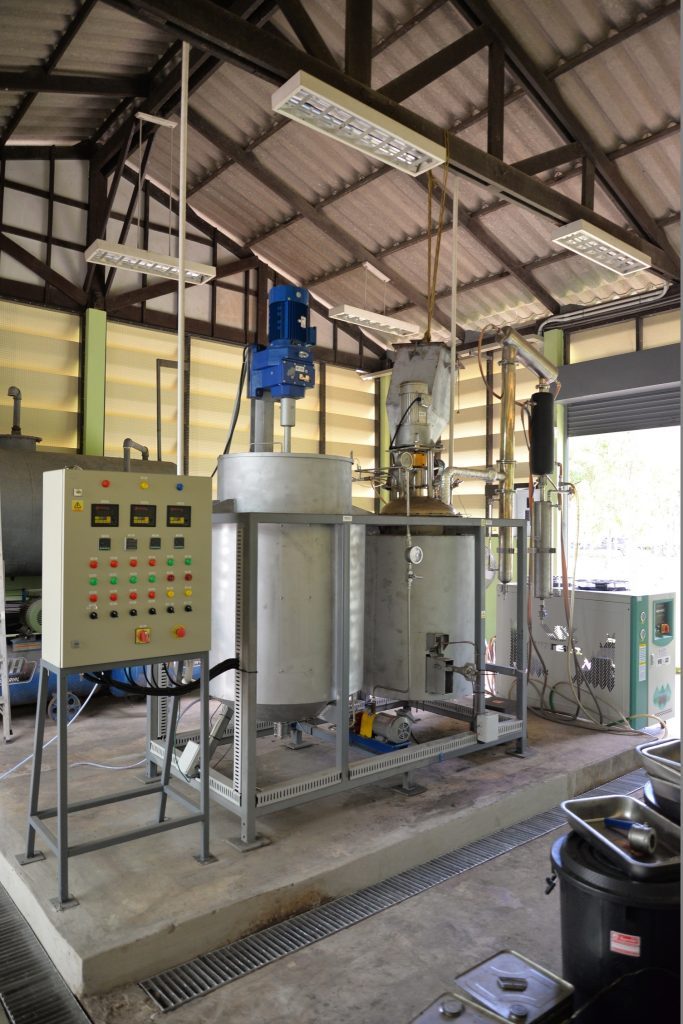