Rotary Parking System, a Parking Solution that Promises to Save Time and Energy

Eco Challenge 2014-15: Moving toward the Next Generation of Eco Cars 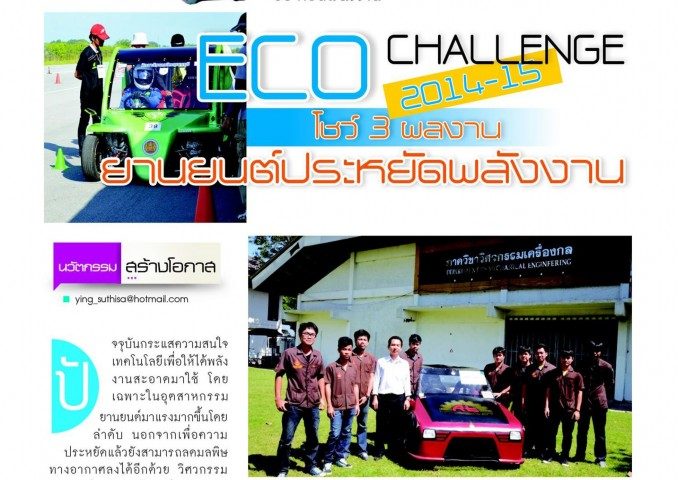 Eco Challenge 2014-15: Moving toward the Next Generation of Eco Cars

Clean energy is one of the increasingly popular trends, particularly in the automobile industry, as it not only helps to save energy but also reduce air pollution. For this reason, The Engineering Institute of Thailand (Under HM the King’s Patronage) together with Society of Automotive Engineering Thailand organized the Eco Challenge 2014-15 competition, in efforts to stimulate ideas from the new generation of university students.

“Thailand is ASEAN’s number one automobile manufacturer, with exports to all corners of the world. Moreover, the government’s policy supports eco cars manufacturing, which again makes Thailand the world’s number one exporter of eco cars. In order to enhance the country’s competitive advantage in the ASEAN region and in the world in the future, we decided to organize the Eco Challenge 2014-15 competition,” said Prof. Dr. Suchatchawee Suwansawat, Engineering Institute of Thailand’s Director.

The competition featured three categories: plug-in hybrid prototype, E85 internal combustion engine, and plug-in smart vehicle. For the first category, the winner was a team from King Mongkut’s Institute of Technology Ladkrabang, INNOGEN KMITL V.2, who broke their own record from the previous year, with 102.6 kilojoules of energy consumption. Second prize went to INNOGEN KMITL V.1, from the same university, with 115.8kJ, and the third prize went to NSTRU Eco-Racing, from Nakhon Si Thammarat Rajabhat University, with 126.7kJ.

The winner of the second category was a team from Sakon Nakhon Technical College, VIRGIN 1, with the energy consumption of 2,200km/1L of E85 gasoline. The second prize was awarded to a team from Phitsanulok Pittayakom School, The Winner, with 2,028km/L, and a team from Rajamangala University of Technology Isan took the third prize, with 880km/L.

The third category had two prizes. The first prize went to RT56 from Rajamangala University of Technology Thanyaburi, with the energy consumption of 1,499.7kJ. The second prize went to a team from Phetchaburi Technical College, with 1,625.9kJ.

Thanan Sakpoonsap, INNOGEN KMITL V2’s team leader said, “Our inspiration came from a whale, with its smooth, round, friction-free form similar to the wings of an airplane. This form enhances the efficiency of energy consumption. In terms of the body’s material, we used carbon fiber reinforced polymer, which is much stronger than metal but also much lighter.” The team had six members, and Assoc. Prof. Dr. Verachet Khan-ngern was the team’s advisor.

The vehicle uses 24-Volt Lithium Ion Phosphate as the battery, which is longer lasting than traditional Lithium Ion batteries. 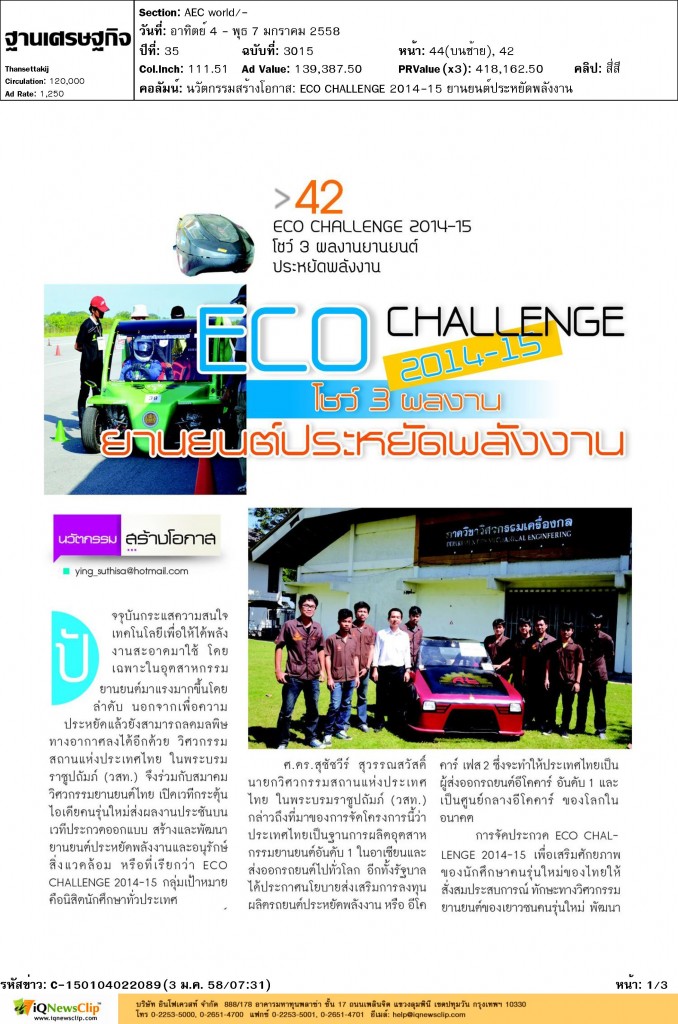