Meet and Greet with The President 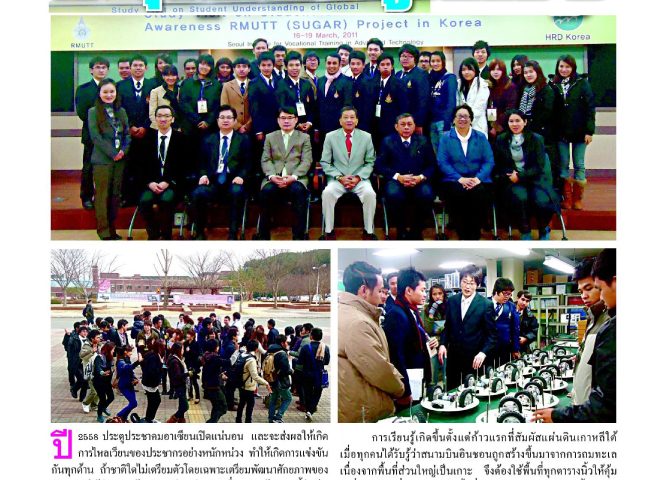 In 2015, the door to ASEAN Economic Community will open certainly and it will effect dramatically in population circulation that is people can go or work in the member country freely. If some nations don’t prepare for it well especially in developing their populations, they will be disadvantage to other countries. In accordingly, the program ‘open vision and study trip’ to make students in the project SUGAR “Student Understanding Global Awareness RMUTT” realize of being international and outstanding, and take them to face hands- on experience outside the campus both in the country and overseas to know about education, economy, language, communication and cross culture.

The trip to Korea in mid-March recently is one of the project activities under the lead of Dr. Piboon Saiyawong, director of Division of Student Development RMUTT, and with 27 students participating.

Learning happened since the first pace stepping  on the land of South Korea when everyone knew that the land of  Incheon Airport was the reclamation of sea. Hence most of the lands were islands, so every square inch must be the most valuable use. Even though living and agricultural areas was also filled by the sea. When getting to the town, it’s so surprised that the buildings were so tidy meaning to the well plan. It’s different from Thailand till it make someone think if we do have city plan. This surprise is also considered a result in vision opening as well.

For the visit according to the objectives of the project that requires students to open their visions, it is a good opportunity that ED Co., Ltd. That is the instruction media manufacture for schools and global universities, especially in science and technology or teaching robots instead of teachers for dangerous experiments yet our home country doesn’t find it so much important, so this visit to ED Corporation can greatly inspire their creativity.

Korea University of Technology focuses on teaching technology which is like RMUTT but when visiting there, it’s found that their teaching and learning is rather different from universities in Thailand seeing that they emphasize students to practice rather than memorizing theories because they aim to produce students who can perform too not just know theories. This point could get someone thinking that the budget is so important to drive Thai universities to be competitive to universities in South Korea.

Apart from the aspect of education, another thing that everyone can notice is their patriotism from the Korean identity exhibition hall where there is a massive building for their history from the past to present completely. Most importantly, it is the animate exhibition which is able to move so spectators have joint feeling with it. It’s seen that Koreans at all ages come to the hall heavily reflecting that they are patriotic.

Students were also impressed by the embellishment of Changgoggung Palace where was one of five’s most important palaces. Moreover they learned about modern concepts in systematic administration by the Institute of Human Resource Development, after they received certificate of accomplishment from Mr. No Man Jin, secretary of Human Resource Development.

Dr. Piboon also said before coming to Korea, students had visited many places like Suvarnabhimi Airport or CP Company, this taught them to be able to identify the working cultures in some stage and they learn more when they visited Korea.  Most importantly, South Korea is the country with jump development, so it’s more developed than Thailand does many times even though this nation grew at the same time as Thailand did. Anyway, he is happy that students have broader and further visions from the saying ‘knowing this we will…’ or ‘from now on we will…’, this is worth organizing the project and after they will be pursued how they can develop their skills.

Chokanant Raksapakdi, 4th year student of the Faculty of Business Administration said this project was very helpful in open vision and be able to learn foreign cultures directly and communicate with foreigners even though unable to speak the local language but can speak English instead.

Tidarat Kiatpornpichet, 3rd year student from the Faculty of Fine Arts said this was the first time of her abroad. She felt so exited and fun learning many new things especially the way of life of people here because they were so responsible in their works and they also emphasized on human capital development. She had to confess that Koreans were so patriotic seeing that they used domestic products and avoid using products from the country that oppressed them before.

“Having conversations with Korean students was so impressive because we could exchange cultures. I also taught them how to speak Thai, Thai dance, Thai song, and someone said they want to visit Thailand very much. And I would always keep in touch with them forever.” She said.

The result from this study trip is just the start in vision opening to students to get ready for the ASEAN Community Opening. After the first pace, there will always be second pace and other paces. But we must bear in mind that learning a lot must be able to applied to benefit appropriately, if not, vision that is opened will be just a short run. 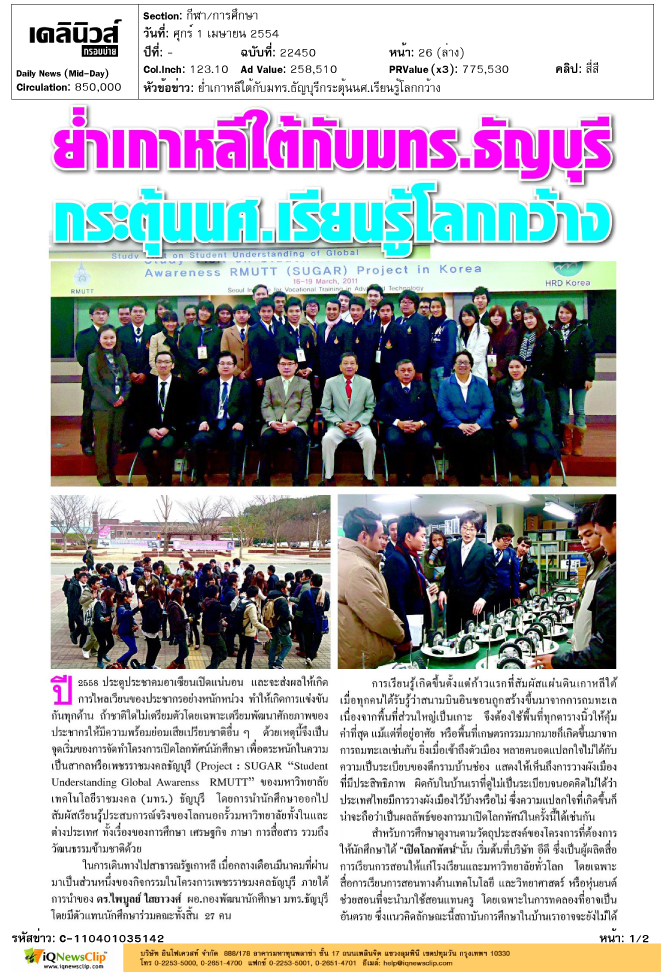