Discovering fire-retardant fiber, preventing the loss from the fire disaster

Lotuses are becoming the gold:1,000 million or Export 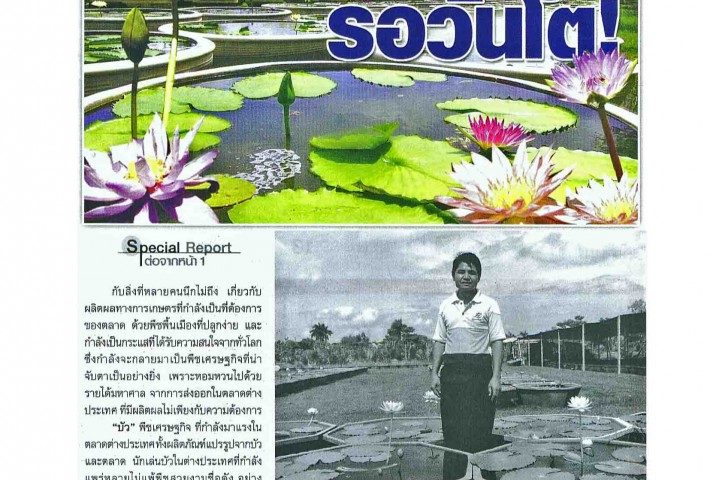 Export with 1,000 million, waiting for the increase!

Many people might be in dough with the common easy grew plant, lotuses, which is now trendily accepted and wanted by customers around the world, becoming the commercial plants with high value counted from exportation, unbalancing for the needs of customers.

“Lotuses” the commercial plants is flooding the world with the beauty of the flowers and transitional products, wanted by many markets including ornamental plant entrepreneurs such as rose or even orchid. Meanwhile, the transitional products are also well-liked in the European and Asian market in term of health & beauty Products.

Asst. Prof. Purin Akkarakultron, a professional of lotuses at Rajamangala University of Technology Thayaburi, RMUTT, revealed to Siam Business that “The current favor in lotuses is increasing continually and it also opens an opportunity for Thai agriculturist to have their own business and increases their income by growing the lotuses, making better chances after the pass of drought and coming nearly of the rainy season.”

“Lotus utilization, entrepreneurs can use every part of the lotuses such as their flower which the foreign markets desire to sell as the beautiful flower decoration. There are various varieties of lotuses such as Queen of Patum Lotuses, Bua Koa Pun Boonyarik, Bua Suthasinobol (‘Royal Purple Lotus’) and Bua Luang Sattabongkoch (‘Double Red Lotus’). Another part of lotuses can be transited into other products such as soaps, shampoo, lotion or even the food ingredients and herbal medicines. From the variety of lotuses usefulness now causes the unbalance of demand and supply. For example China, they extravagantly need the lotuses for their herbal medicine products but unfortunately there are not enough of the supplies. Meanwhile, Thailand where is located at central plain region is the most appropriate area to grow up these kinds of plants.”

“In fact, the lotuses are the easiest treatment plants and they are playing the current virtue roles in many markets such as in European and America. Some lotus varieties are used to decorate in many important places such as hotels, restaurants and others. In addition, some variety costs around 10,000 – 100,000 baht, such as Nymphaea gigantean atrams, which its flowers can last long 7 days with its color changes every day. Moreover, some variety can be seen only in Thailand such as Water Lily (Jongkolnee) which its flower are bloomed and it has never shut. Meanwhile, Asian markets such as Korea, China, Taiwan and Japan play excessively interest in transitional products”, Asst. Prof. Purin mentioned.

He also added his mention about the income which it might be gained by the agriculturists that “it is possible to gain profits of investment in growing lotuses. If compared to the demand which is higher than the supply, there will be certain opportunities to get high profits. If there is an interest in investment in lotuses, RMUTT is also ready to support all information about.”

He also added to his remark that “the income average per 1 rai is estimated being gained around 50,000-60,000 baht and 25,000 baht left after cost of production deducted. Furthermore, lotuses can be harvested many times per a year. Maybe, its harvest value is higher than rice farm. So that is the reason why the lotuses farm are continually favorite. However, for who is going to invest in growing the lotuses needs to study much more about the lotuses.”

“Now, RMUTT Lotus museum with many faculties has much campaigned and integrated the teaching and studying of lotuses under the royal projects about the lotus conservation following the royal remark of HRH Princess Maha Chakri Sirindhorn to promote Thai agriculturists’ income following the sustainably sufficient economics.”

“This is a part of Bua or lotuses which are becoming commercial plants in near future and they are also golden opportunities for Thai agriculturists who are seeking new way of passive income.”

Bua is something which is hiding people’s eyes. Many people might be not able to believe that Bua can make bigger exportation business. If the total of revenue is counted, the amount of money is at many billion baht. And, if there is a support from the government, the amount of income might be greater than 10,000 million baht. In conclusion, Thailand is an appropriate country and area to grow up these kinds of plants.

This is a golden opportunity which Thai people might be waiting for.