Inspiration for being artists with the artists 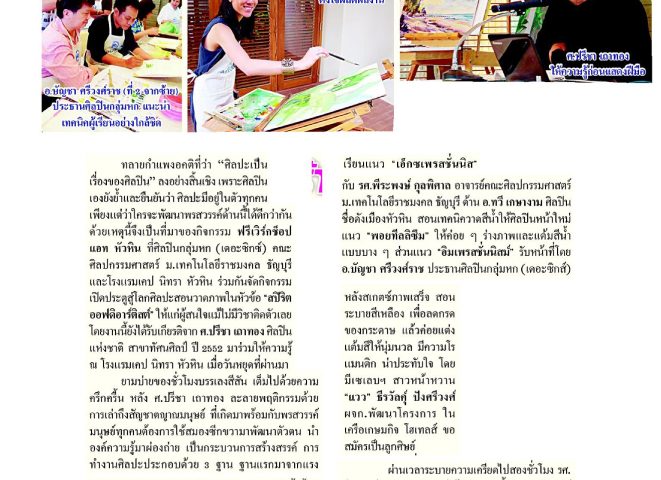 “There is no interruption to the world of arts even there is not art skill in mind” was said by the artists who believe that art is in everyone, but it just needs a talent development and who does it well. According to that reason, the Six group from Faculty of Fine and Applied Arts, Rajamangala University of Technology Thanyaburi (RMUTT), joined hands with the Cape Nidhra Hotel, Hua Hin to teach interested persons, who even do not have any art knowledge, about drawing under the concept of the “Spirits of Artists”. In this activity, Prof. Preecha Thaothong, the national artist awarded in Visual Art, 2009, had been invited to perform as a guest teacher.

In afternoon section, the class of art was full with knowledge and fun when Prof. Preecha gave his students about the background of arts and the human sprits that everyone has their own talent but it depends upon how the right side brain will develop the skill. The skill of art is divided into three phases; firstly, the skill comes from inspiration, faith, imagination, hurtful memories, leading to the second phases that the brain will synthesis it into practicing and finally the idea and practice will be conceptualized into uniqueness.

After that, the time for real learning started. The participants were separated into groups and drew the picture. For those who love hard feeling, Assoc. Prof. Peerapong Kulpisan, the teacher from Faculty of Fine and Applied Arts, RMUTT, would have taught them under the theme of “Expressionisms”. The “Expressionisms” theme would have been taught like fast drawing and feel funny. Meanwhile Ajan Tawee Kasangam, the well-known artist from Hua Hin was performing as a teacher to teach about water painting, Ajan Bancha Sriwongratch, an activity teacher and also the head of the Six group, was teaching about the concepts of “Impressionism” by firstly painting yellow color as background before putting the other color in order to get soft feeling expressing romantic emotion. Hereby, Khun Theerawan Pungsriwong (Waew), the manager of Project Development of the Kaserm Kit Hotel Group had also participated.

From time being after long practice, Assoc. Prof. Peerapong and Ajan Bancha had given the feedback about the works were done and delivered encouragement for an improvement, and took these works to display at Thailand National Gallery Museum under the theme of “Spirits of the Artist” on August 5th, 2010. 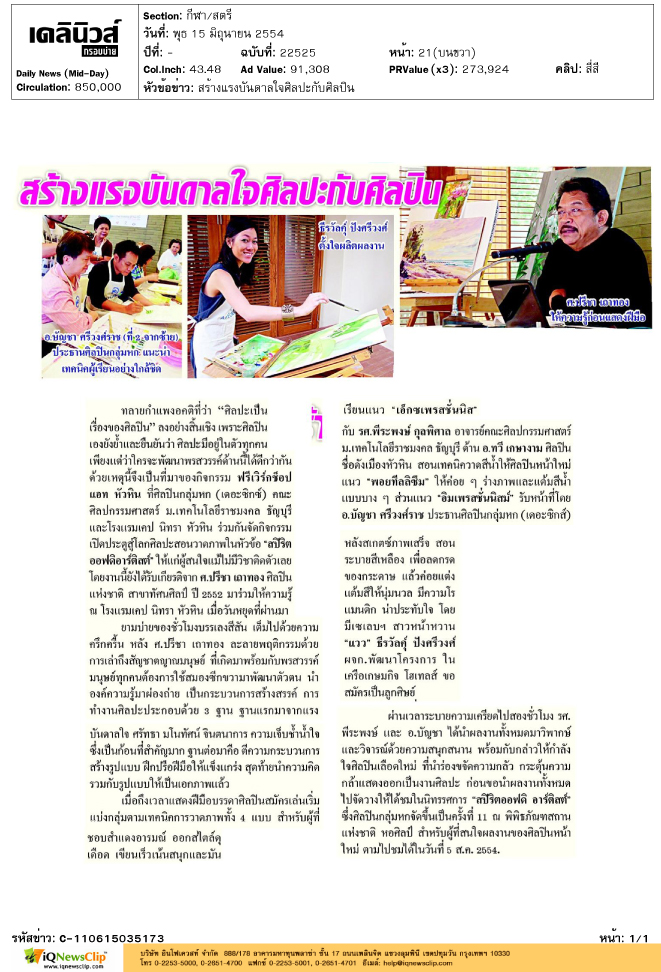