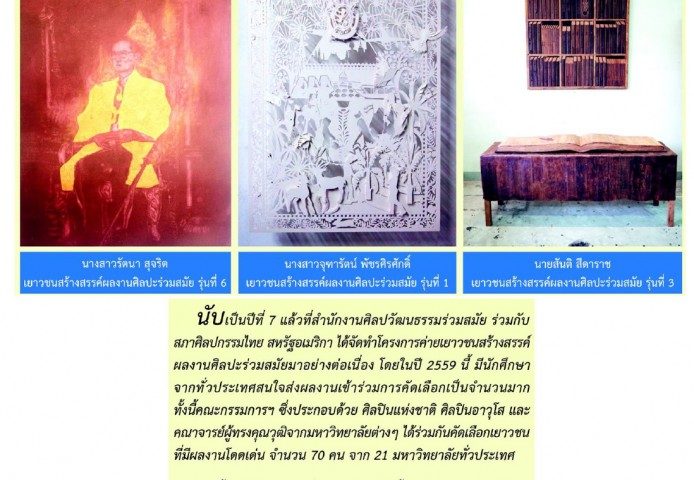 It is the seventh year that the Office of Contemporary Art and Culture (OCAC), in collaboration with the Thai Art Council have organized a youth camp to create contemporary art. In 2016, numerous students from all over Thailand expressed their interest in submitting artwork to be displayed in the youth camp. The committee, comprised of national artists, senior artists, and highly qualified professors from various universities have selected 70 outstanding youths from a total of 21 universities nationwide.

Mr. Thanawat Channimit from Thaksin University said that he felt very fortunate to be given this opportunity to travel to the United States. He noticed that the United States seemed to emphasize trees, as implied from landscape plans in housing designs as trees are beautifully planted in the landscape. Mr. Thanawat also had the chance to see world-class work that he had learned about in his curriculum, which further empowered him to continue creating and improving his art skills.

Due to the occasion to celebrate the 70th anniversary of His Majesty King Bhumibol Adulyadej’s accession to the throne, The Office of Contemporary Art and Culture (OCAC) have organized an art exhibition to show their respect to, remembrance of, and sincere gratitude towards His Majesty as “a great artist.”

His Majesty was able to create art in various forms, which have encouraged artists to create their own works, such as art created by a new generation of Thai artists from the first to seventh series of The Young Artists Talent Art Exhibition, which have subsequently promoted Thai culture. The 7th Young Artists Talent Art Exhibition allowed the public to vote for their favorite artwork through two channels – voting at the exhibition or online. More than 10,000 people voted between May 31st to June 7th. The committee have incorporated the votes in order to select five new generation artists to study museums and art galleries in Amsterdam, The Netherlands, comprised of Mr. Kampon Moongnarm, Ms. Jutharat Patcharasirasakdi, Mr. Patipon Suphanapong, Ms. Rattana Sujarit, and Mr. Santi Sidarat.

Ms. Jutharat, a graduate from Burapha University, participant in the first series of Young Artists Talent, and currently an art professor said that she gained inspiration to create her art work from the phrase “Thai people love the King.” Thus, she interpreted the phrase as His Majesty’s King Bhumibol Adulyadej’s principles of self-sufficiency, yet His Majesty is hard-working, strives to improve Thais’ quality of life, and is a role model of doing good. She chose to use pure white paper to represent His Majesty King Bhumibol Adulyadej and used paper-cutting techniques to convey His Majesty’s continued perseverance in doing good. Ms. Jutharat believes that people also think that they are fortunate to be born in the reign of His Majesty, which is why they all love and respect His Majesty.

Ms. Rattana, a graduate from Poh Chang University and participant in the sixth series of Young Artists Talent said that she gained inspiration from seeing His Majesty’s dedication and sacrifice for Thai people. She began to sketch a royal portrait using etching techniques through the process of first making the mold dark, then gradually sketching on the page to remove black shadows, resulting in a bright light shining out of the royal portrait of His Majesty King Bhumibol Adulyadej. The light shining out is comparable to the light in the hearts of Thai people. This royal portrait took almost two weeks to complete. Ms. Rattana would like to thank The Office of Contemporary Art and Culture (OCAC) and Ministry of Culture for organizing a beneficial program to provide opportunities for Thai youth to study and improve their skills to be competitive in the international level.

Mr. Santi, a participant in the third series of Young Artists Talent said his wooden bookcase consisted of wood parts shaped like a book, which were beautifully rearranged. It is a 2D artwork that represents vast knowledge that His Majesty has collected and has systematically preserved for Thai people. Personally, Mr. Santi thinks that the Book of Condolence, a 3D artwork, is larger than the actual Book of Condolence. He also believes that His Majesty King Bhumibol Adulyadej serves as a reminder for us to be conscious in the way we live. His Majesty’s teachings may be practically applied by using consciousness for success in personal and societal development, as well as development of the nation.

Youths that participated in various series of Young Artists Talent all agreed that His Majesty is a great artist of Siam and a role model of beauty in all aspects. Furthermore, youths that love art were advised to pursue their passion and must strive to do their best both in terms of studying and working. Everything depends on the mind, potential, and opportunity, which are essential and must be sought and effectively utilized. Although not everyone was selected to study abroad or obtain further studies, this opportunity was still valuable and worth the effort.