Faculty of Agricultural Engineering, creates a method to keep broccoli for 18 days.

Ministry of education is ready to push the standard of Thai vocational education to international level. 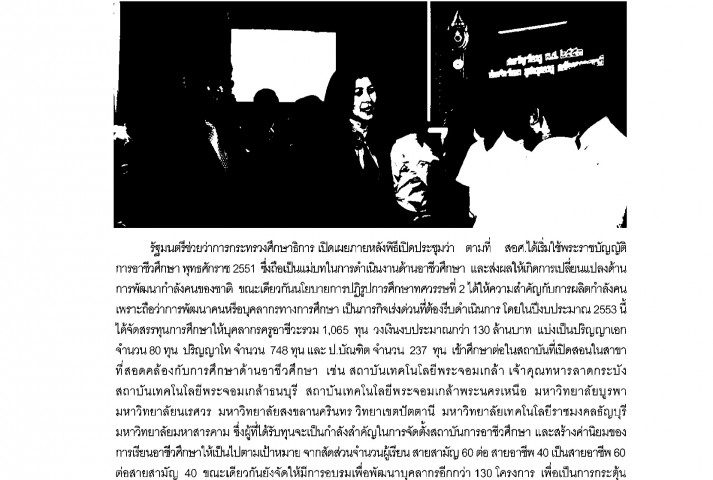 Deputy Minister of Education Ms. Narisara Chavaltanpipat is the president of opening ceremony of conference about the officers who receive the scholarships to study SP 2, Vocational Education Commission at the meeting hall, Secretariat Office of the Teacher Councils

Deputy Minister of Education revealed after opening the conference that, according to สอศ.initiate Vocational Education Act, year 2010. This is accounted as the main act of the operation of vocational education and creates the change of the development of national human power. In the same time, the important mission after the educational reformation in the second decade was on developing human power or educational staffs. 2010, the budgets for educational scholarship is allocated to increase their human resources’ ability. In this year, there are 1,065 scholarships for vocational teachers with more than 130 million baht. This is divided in to 80 scholarships for doctoral degree and 748 scholarships for master degree and 237 scholarships for bachelor degree. They will study in the universities that open these relevant vocational fields of study such King Mongkut’s Institute of Technology Ladkrabang,  King Mongkut’s University of Technology Thonburi,  King Mongkut’s University of Technology North Bangkok Burapha University Prince of Songkla University (Pattani Campus), Rajamangala University of Technology Thanyaburi (RMUTT) and Mahasarakham University. In this time, who gets the scholarships to study will become the power of vocational institute and create value for studying in order to achieve the goal setup. From the ratio of providing scholarships at 60 for academic qualifications and 40 for vocational qualifications, it has become into 40 for academic qualifications and 60 for vocational qualifications, meanwhile there are more than 130 projects be created to develop the capabilities of human power. It is aiming to urge and recue the field of study which is relevant to the development of the economy such as English for tourism and tourism, telecommunication technology development and development of logistics. So far, this is the big development for human capability truly responding to the national plan of development.

Deputy Minister of Education also added that, not only developing the vocational human power, there will be also the institutes of vocational qualification to manage the structure and help the students who can complete their degree have their ability, skills and competency and at the same time, they will be hired at the appropriate turnover following their ability as well. These would be accounted as their success for their studying purposes.